When I started out making performances in the 1990s the question of whether an event should or should not be documented was still asked. That question is rarely raised today and has passed instead into academic discussions on the ontology of performance. The question I more typically hear around me has became, “how should events be documented and for whom?” What’s more, with the greater integration of technology into performance practices and the embrace of online platforms for both publicising and discussing performance, a much broader and nuanced approach to documentation has established itself. I would like to take a current project of mine, The Tour of All Tours as an example to look at some of the ways in which this dance with documentation takes place, which is to say, how the live event both departs from and approaches documentation. 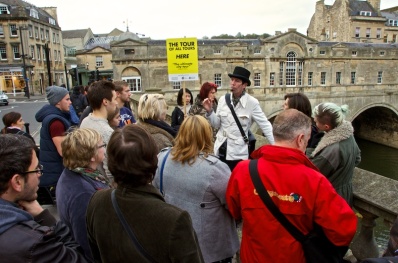 The Tour of All Tours is essentially a guided tour of guided tours: a journey through a real location during which I stop in a number of spots and talk about the different sorts of tours that could be experienced in the same place. It can be thought of as a parasitic guided tour, but more than that, it offers critical commentaries on tours, which form an integral work in their own right. The tour quite deliberately occupies a slippery location somewhere between performance art and tourism.

The project is necessarily made anew in each location ensuring that both the local tours and environment are researched afresh each time a tour is constructed. This research phase of the project of taking tours has taken a life of its own through the project’s blog tourofalltours.blogspot.co.uk where I regularly post reviews of the tours I take. These reviews are not typical Trip-advisor reviews, they are instead rooted in the experience of taking the various tours and stress the active role I play in the construction of the experience. What’s more, they regard tours with the eye of a performance maker scrutinising features of tours that would not normally be remarked upon and comparing tours with one another to slowly construct a highly subjective taxonomy of them. In this sense these reviews blur the line between critical and creative writing, documenting not just the tour but also the reflection upon it.

The writing of these reviews has come to constitute a significant part of the creative process of making a tour because they are the primary source material I draw upon. The concepts, tone and details that I go into in the actual performance are usually already present in the blog which is, in effect, a public form of writing process. That said, when giving the performance something specific to the location, route, the people on the tour and the living environment always also informs the work. In this sense the live event, a performance of reviews, could be understood as departing from documentation.

I generally find that conventional video documentation of my live performances is somewhat tedious to watch. This is particularly true with outdoor performances, which, while having greater potential for multiple focal points, usually fail to capitalize upon it with video footage all too often consisting of the backs of peoples’ heads. Consequently, I have increasingly gone about more consciously adapting my performances for the camera and have found that these videos, much like the blog, have taken on a life of their own and have reached a much broader audience than the live performances. Whilst attracting large numbers has never been my main objective, it is the greater visibility of the work as a result of these creative documents that has helped the live performances reach a broader public. What’s more, this approach to documentation has produced some video and audio works that are neither parasitic nor in any way inferior to the live event but rather, are original artworks in their own right that explore the ideas within their own medium.

There is no standard way I approach documenting my own projects and The Tour of All Tours is a case in point. The performance has had to develop as a performance in its own right first and only in the project’s second year have I begun adapting it for the camera. This I have done by doing away with the live public altogether and concentrating upon performing the work directly to the lens. I have experimented with different strategies to record the work and first used the camera as an eye exploring the sites with a voiceover providing commentary. Using animated still images instead of video; this approach has produced a lengthy video work that is suitable for gallery presentation. I have since also begun to develop a second approach to adapting the performance for the camera and this is to deliver monologues on location direct to the camera appropriating the aesthetic of the travel show. This is, it goes without saying, a more populist approach that also yields excerpts that work online. It has the effect of emphasising the kitsch aspects of tourism and brings out a more heavily ironic tone than is present in the original performance, so it is necessary to use it carefully so as not to be led too far down this line, as it can misrepresent the work. It does however make great publicity, arguably one of the purposes of documentation.

I think it is fair to conclude that over the last 20 years during which the Internet has grown from being something mainly used by a relatively small number of people in computing and database management to today when it has become the primary way in which I am visible as an artist, a great deal of change has taken place in my relationship to documentation. I have found it both practically necessary and artistically rewarding to engage with the screen and broadcast media. Where we will go in the next 20 years I cannot say but I feel that with an artistic practice rooted in performance and highly flexible in its manifestation, I am ready for whereever the journey takes us.

Bill Aitchison is an interdisciplinary performance artist who has presented his work in galleries, theatres and festivals in Europe, Asia, America and The Middle East. He holds a practice-based PhD from Goldsmiths College is published in several languages, has worked in radio and is associate research fellow at Birkbeck College, University of London.